The GLORY of BEADS

Author. Nicole Anderson, of The Glory of Beads-The Rise & Fall of the Societa Veneziana per I’lndustria della Conterie’

A book to educate bead enthusiasts on the production and history of Venetian glass beads. 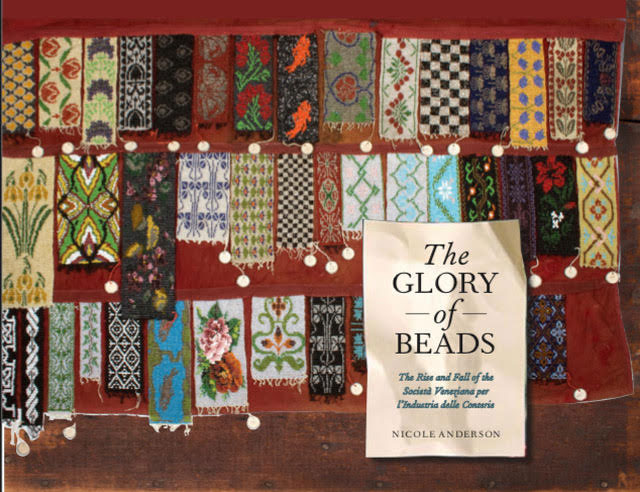 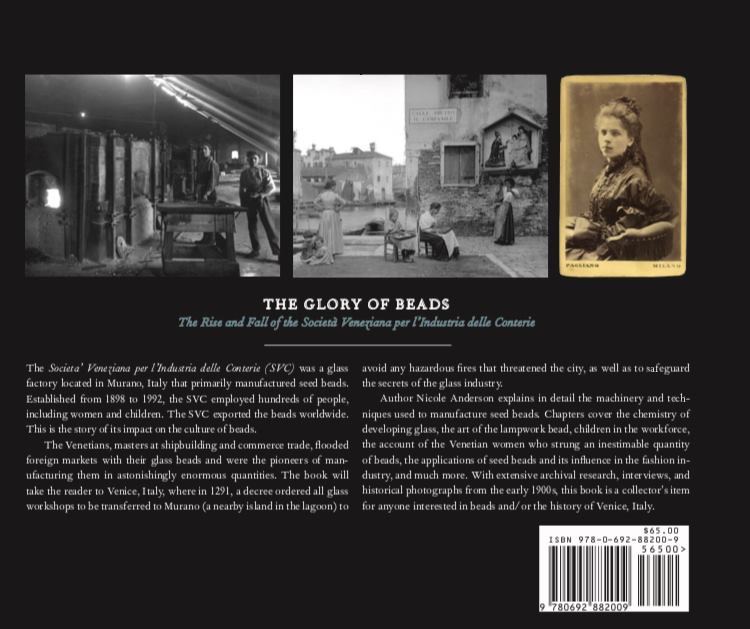 THE GLORY OF BEADS

The Società Veneziana per l’Industria delle Conterie (SVC) was a glass factory located in Murano, Italy that primarily manufactured seed beads.  Established from 1898 to 1992, the SVC employed hundreds of people, including women and children.  The SVC exported the beads worldwide.  This is the story of its impact on the culture of beads.

The Venetians, masters at shipbuilding and commerce trade, flooded foreign markets with their glass beads and were the pioneers of manufacturing them in astonishingly enormous quantities.  The book will take the reader to Venice, Italy, where in 1291, a decree ordered all glass workshops to be transferred to Murano (a nearby island in the lagoon) to avoid any hazardous fires that threatened the city, as well as to safeguard the secrets of the glass industry.

Author Nicole Anderson explains in detail the machinery and techniques used to manufacture seed beads.  Chapters cover the chemistry of developing glass, the art of the lampwork bead, children in the workforce, the account of the Venetian women who strung an inestimable quantity of beads, the applications of seed beads and its influence in the fashion industry, and much more.  With extensive archival research, interviews, and historical photographs from the early 1900s, this book is a collector’s item for anyone interested in the beads and/or the history of Venice, Italy. 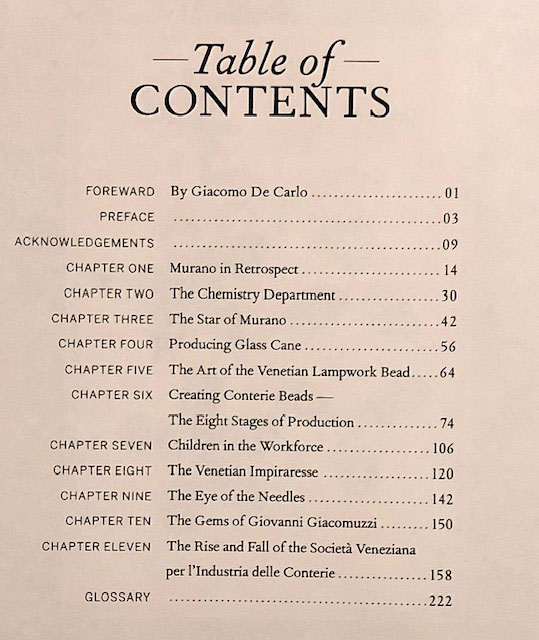 Some Photos From The Book 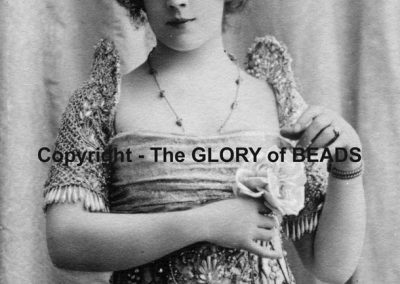 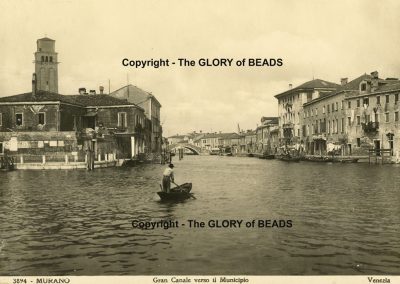 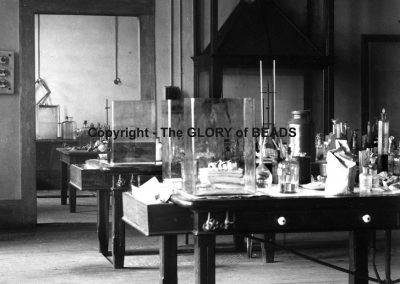 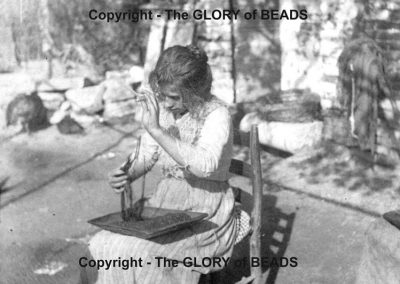 * $5.95 Shipping is for continental USA only. Michigan residents will be charged 6% sales tax.

We Ship the Book and Beads all over the world. Please contact thegloryofbeads@gmail.com to arrange for International Shipping Charges.

You can use your credit card or PayPal account for payment.

Contact thegloryofbeads@gmail.com for shipping mulitple copies or for Alaska, Hawaii and International shipping.

The Glory of Beads.  The Rise and Fall of the Società Veneziana per l’Industria delle Conterie.

Author Nicole Anderson shares her passion for the history of the Venetian seed bead consortium, Società Veneziana per l’Industria delle Conterie (SVC), in this well-researched volume.  The introduction takes the reader through the ups and downs of doing research as a foreigner in Italy, and the story of how the book came into being is an inspiring lesson in persistence.

Anderson faithfully records the human side of the successes and misfortunes of the glass bead industry in Murano and Venice. The book is far from a dry compilation of facts as she weaves many small but poignant items into the narrative, for example the requests for work permits for children from destitute families.

The book is lavishly documented with photographs from the late 1800s to mid 1900s of the workers and equipment used in the glass and bead industry, and also of the items such as fringe that were created with the beads.  One small criticism of the photos is that few are dated; however the undated ones are clearly from the late 1800s to early 1900s era.  This omission was due to lack of provenance for the photos, not to an oversight by the author.  The book also lists numerous reference materials and a glossary of terms.

The first five chapters give background information about the history of Murano, glass making, and bead-making.

Chapter 1 Murano in Retrospect gives a brief history of the island and the origin of its glass bead-making industry, which by tradition (if not by actual documentation), began in the late 1200s.  The waxing and waning of the fortunes of Venice and Murano are described, including the late 1800s to early 1900s “heydays”, and ending with the struggles due to increasing global competition after WWII. Although glass work of all types is still found today on Murano, it is, sadly, a shadow of its former glory.

Chapter 2 The Chemistry Department presents the reader with historical information about the composizionatore, or glass technicians, who formulated and made the glass needed for bead production.  Readers both with and without a technical background will appreciate the empirical nature of glass technology and how it advanced by trial and error up to the modern era.

Chapter 3 The Star of Murano discusses the 17th century invention of avventurina, aka aventurine or goldstone.  The hard-to-reproduce process resulted in success for only 5% of the batches, even with pleas for divine intervention.  Amazingly, one large successful batch of avventurina made in 1901 was used by the SVC bead makers for almost 100 years.

Chapter 4 Producing Glass Cane describes the process of producing perforated as well as non-perforated cane for the production of conterie (seed beads), stringers and millefiori slices for lamp work, and rosetta cane for chevron beads. Until the process was mechanized in the 1980s, cane was drawn by two runners (tiradori) who sprinted up to 100 yards, stretching the hot glass into its final reduced diameter.

Chapter 5 The Art of the Venetian Lampwork Bead is another brief history, this time of Venetian lamp work beads, which date from 1528.  This short chapter highlights the role of the women (perleri) who largely worked at home and formed the backbone of this cottage industry.

Chapters 6 – 10 are more specific to the production and end use of glass seed beads.

Chapter 6 Creating Conterie Beads is the technical “meat” of the book, as it describes bead production by the SVC. Glass cane was transformed into seed beads in aneight-step process, followed by stringing and packaging.  The author obtained and reprinted photographs of the factory workers and equipment thereby very dramatically bringing the entire process to life.

Chapter 7 Children in the Workforce is a poignant description, with historical records, of the conditions  that forced children from as young as 8 years old to start apprenticeships or to seek day work in the glass factories.  Children were illegally employed through the 1960s, often having to hide from inspectors to avoid losing their jobs.

Chapter 8 The Venetian Impiraressa is a gripping chronicle of the life and work of the women who strung seed beads for the SVC.  The women performed the critical last step in preparing seed beads for sale but lived and worked in grinding poverty.  The story of the impiraressa is one of both exploitation by the glass industry and personal devotion; their wages often supported an entire extended family.

Chapter 9 The Eye of the Needles expands the cast of seed bead characters with the life story of Aldo Bullo, who produced the hair-thin needles used by the impiraressa. Bullo invented his own process for making needles and developed a profitable side business, run by his wife, all the while working full time as an engineer for a Venetian firm.

Chapter 10 The Gems of Giovanni Giacomuzzi is a short chapter detailing his invention of golden yellow glass based on uranium salts.  The glass was used to make seed beads that decorated specialized ecclesiastic and other cloth (usually velvet) items, mimicking the appearance of gold encrustation.

Chapter 11 The Rise and Fall of the Società Veneziana per l’Industria delle Conterie (1898 – 1992)  is the longest and last chapter of the book. The reader, equipped with the details from the previous chapters, is treated to the specific history of the SVC.  The SVC was a merger of seventeen separate companies hoping to insure their survival after the global depressions of the late 1800s.  Like the preceding chapters, this one is supplemented with period photos and translated excerpts.  The SVC built an immense new factory and warehouse structure for manufacturing beads, as well as beaded items like flowers for funeral wreaths, for customers on six continents.  The company suffered many ups and downs and was finally put out of business by lower-cost competitors in the early 1990s.

In sum, this book is an informative if bittersweet window into the lives and times of the Muranese and Venetian glass bead workers, together with the technical and historical development of glass and seed bead production.  The book is certain to greatly enhance one’s appreciation of Venetian glass seed beads and the items that were decorated with them.

In sum, this book is an informative if bittersweet window into the lives and times of the Muranese and Venetian glass bead workers, together with the technical and historical development of glass and seed bead production.  The book is certain to greatly enhance one’s appreciation of Venetian glass seed beads and the items that were decorated with them. 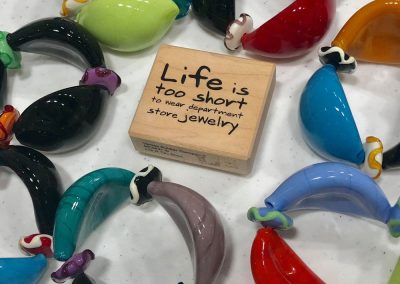 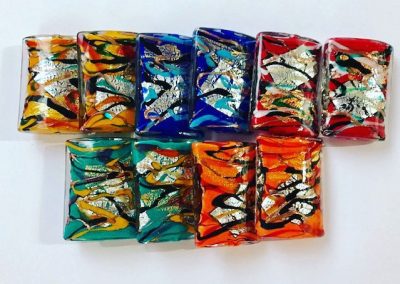 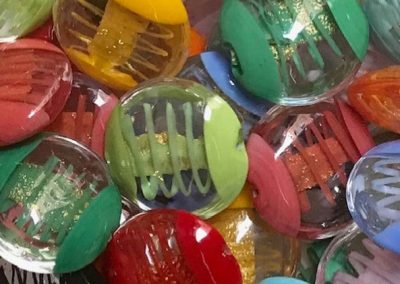 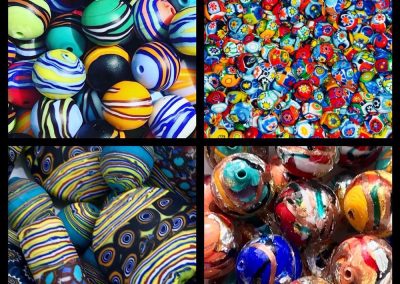 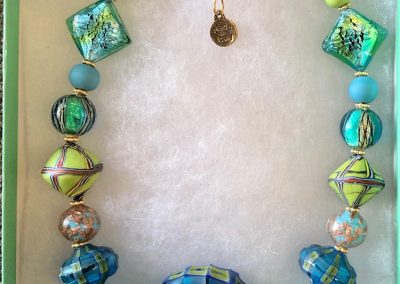